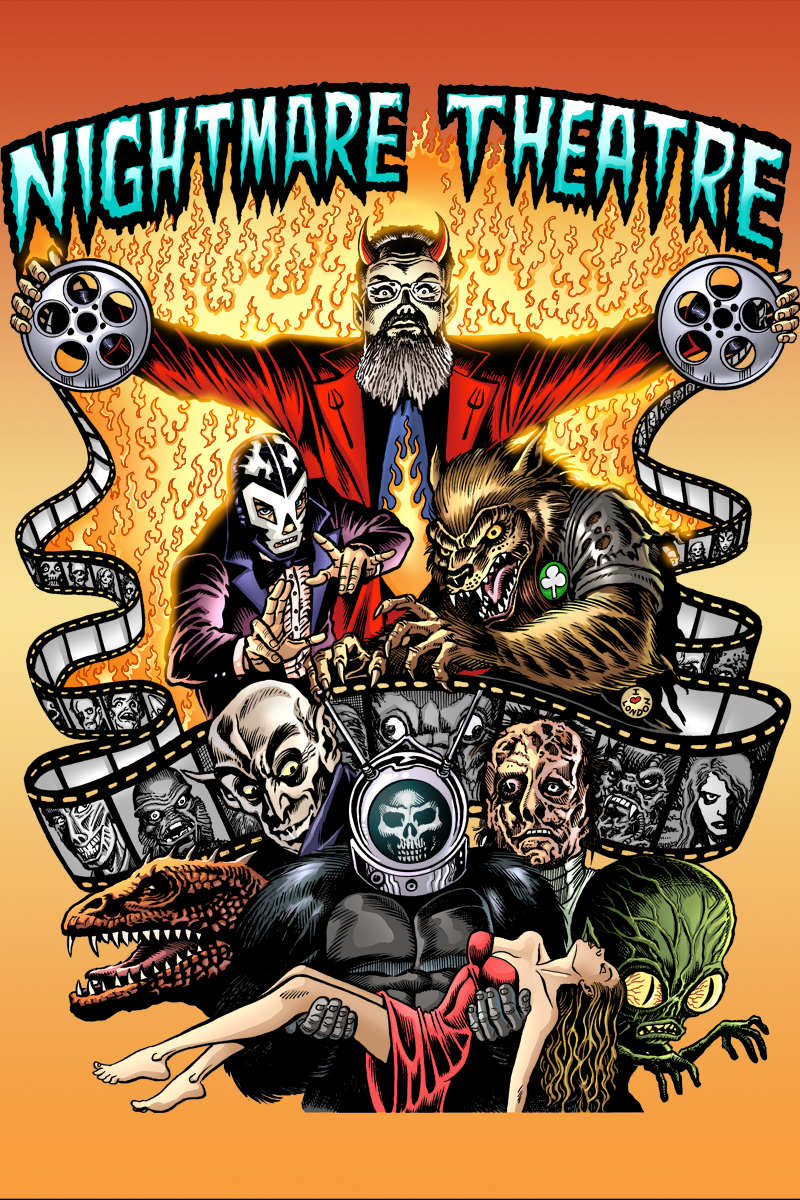 Halloween Special - Encounter with the Unknown

Mike Ensley, Chip Chism and Lemmie Crews have been presenting horror genre films for Pensacola audiences and beyond for 17 years. Their NIGHTMARE THEATRE television show first found a home on Cox Media Channel 39 in 2001. Since then, there have been film festivals, other cable access broadcasts and even a national appearance on SpikeTV’s “Ghouls Gone Wild” in 2006.

Ensley, Chism and Crews have gained renown beyond the local viewing area as NIGHTMARE THEATRE hosts: the Baron Mondo Von Doren, El Sapo de Tempesto and Mittens the Werewolf. They are part of the Horror Host Underground Network and were inducted into the Horror Host Hall of Fame at the HorrorHound Weekend convention and film festival in Cincinnati, Ohio in March.

In the series plot, the Baron is a minor demon assigned to the physical plane to inflict misery upon mankind by way of “bad” movies. With his sidekicks—the masked wrestler El Sapo and pet werewolf Mittens—the Baron introduces old horror films in a humorous manner with little respect and a side of intriguing film history.

A genetic experiment gone awry creates a race of giant carnivorous rodents that threaten a group of castaways trapped on a remote island in a hurricane in this 1959 low-budget bomb.

Inspired by this week's film, Roger Corman's 1960 tale of a busboy-turned-murderous-sculptor, "A Bucket of Blood," The Baron opens up a coffee shop and El Sapo tries his hand at beat poetry.

In yet another genetic experiment gone awry, a mad scientist attempts to create a race of superwomen in the Mexican desert, but ends up with giant spiders instead in this confusing film from 1953. The NMT crew try in vain to make sense of it all.

This week's movie, William Castle's 1959 creepfest "The House On Haunted Hill", wherein Vincent Price's character throws a haunted house party with deadly results, inspires El Sapo to organize his own party for the Baron and Mittens.

El Sapo discovers evidence that he wasn't the Baron's first choice as manservant, as they join Boris Karloff and Jack Nicholson in the poorly-named "The Terror", from Roger Corman in 1963.

After a horrific auto accident, a brilliant surgeon attempts to keep his fiancé’s head alive while searching for a replacement body in this 1962 drive-in disaster, as the Baron offers helpful driving safety tips.

It's panic on the bayou as the gang screens the 1972 TV movie "Moon Of The Wolf," set amidst the class-divided Louisiana swampland. El Sapo and Mittens lament the discrimination against werewolves in media.

A cosmetic company executive seeks the secret of eternal youth through injections of wasp venom, with predictably horrific results in "The Wasp Woman", a 1959 Roger Corman chiller. Meanwhile, the Baron explores the downside of scientific experimentation in cinema.

Thank you to our sponsors!